Whatever Happened to Global Warming?

The Pause In Global Warming

When does a trend stop being a trend? Put another way, when does a “pause” in a trend become a new trend?  Okay, let’s cut to the chase: Whatever happened to global warming now that global cooling is here? A good question you may think given the billions of government dollars which are supporting a climate alarmist industry. An industry rooted entirely in what turn out to be a battery of entirely wrong predictions, according to the latest leaked version of the UN IPCCs Fifth Assessment to be published on September 27. The same wrong predictions used to justify ubiquitous green taxes as well as subsidies to costly renewable energy projects.

While the UNIPCC, government bureaucracies, climate experts – that oxymoron again – suckered Guardianista-style journalists and various shades of ‘green-behind-the-ears’ would-be planet-savers are currently attempting to spin the latest IPCC admissions, front and center is the stone cold fact that global warming isn’t happening and hasn’t happened for nearly 17 years. Yet green elites continue to cling to the notion of a ‘warming trend’. What warming trend?

According to various reports the upcoming IPCC assessment in its ‘summary for policymakers’ is forced to admit that all four previous reports had over-estimated the rate of decadal warming since 1951. Most significant, however, is the admission that computer modelled forecasts failed to factor in the “natural variability” of the climate. And that’s precisely the main rolling criticism made by climate sceptics for the past two decades.

Needless to say, governments are starting to ask serious question – around 1800 at the last count – about why not a single computer model predicted a “pause”. Governments also want to know why:

In 1989, researchers concluded that anthropogenic global warming would raise the global temperature by a full 2 degrees by 2010. According to NASA the actual temperature rise between 1989 and 2010 was less than half that, a mere 0.7 degrees. But even the climate alarmist flag-waving New York Times is now reporting that the upcoming IPCC report is admitting to significant predictive failures. The new report is set to state that the world has warmed just 0.05 degrees Celsius (0.09 Fahrenheit) per decade, a mere fraction of the predicted 0.2 to 0.9 degrees Celsius confidently forecast by the UN IPCC’s 2007 report. As Professor Ross McKitrick, a long-term critic of the UN IPCC, rightly states, that is “well within the margin of error” and falls well below the very lowest projection of the IPCC.

The UK Met office’s influential CET temperature figures (see below) further reveal a fall of almost a full 1 degree – more than wiping out any warming gain over recent decades. 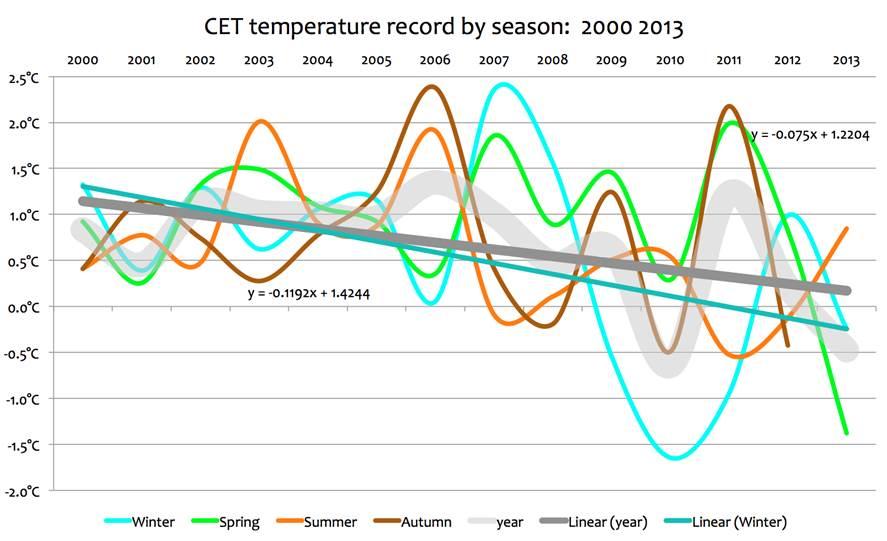 Makes no bones about it, this IS big news.

Consider for a moment how it represents an abject and total failure of projections responsible for entire governmental policies.  As McKitrick points out, “There is a high probability we will witness the crackup of one of the most influential scientific paradigms of the 20th century, and the implications for policy and global politics could be staggering.”

Climate scientist John Christy at the University of Alabama, Huntsville is blunt, telling Fox News, “There is something that needs to be fixed in the climate models”.  Christy insists it’s a problem going back 35 years. “I looked at 73 climate models going back to 1979 and every single one predicted more warming than happened in the real world.”

In September, a new study in the journal Nature Climate Change further compared 117 climate predictions from the 1990s to the actual warming. The study showed that, on average, predictions forecast twice as much warming as actually took place. The study’s author later revealed that of 117 predictions just three were roughly accurate, 114 over-estimated the warming. Asked to comment, Melanie Fitzpatrick, a climate scientist with the Union of Concerned Scientists, stated, “Climate models will likely be accurate over long periods of time. But there are too many variables to be accurate over two decades.” What Fitzpatrick is saying is that “reading the future climate” is difficult and an inexact science. Am I missing something? Won’t there then continue to be “too many variables” for us also to predict with any degree of “certainty” beyond a couple of decades then?

Referring to the IPCC report for which he is a key author, Professor Myles Allen, the director of Oxford University’s Climate Research Division, is already in heavy spin mode: “It is a complete fantasy to think that you can compile an infallible or approximately infallible report that is just not how science works.” But isn’t that precisely what sceptical scientists have been saying for years? And isn’t it precisely what the IPCC and its adherents have consistently refused to admit – demonizing all who disagree?  Allen goes on, “Frankly both sides are seriously confused on how the science works – the critics of the IPCC and the environmentalists who credit the IPCC as if it is gospel.” Are they? Surely the IPCCs critics, being only too aware of “how science works”, have long derided the IPCCs gospel-like  “certainties” that man is the prime cause of global warming which MUST, given rising CO2 levels, push the global average temperature beyond normal variations. 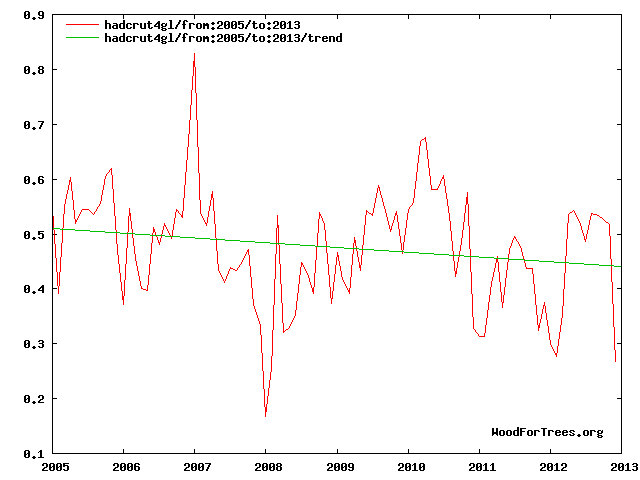 The global average temperature over the last 8 years has consistently declined.

And yet, the one prediction of which the IPCC remains entirely “certain” – upped from 90 in the fourth assessment to 95 percent in the fifth – is that man is to blame for global warming. That is, the serious degree of warming that …er…is not actually happening. Europe’s climate policy chief, Connie Hedegaard, has even jettisoned any pretence of intellectual coherence announcing that even if the science was, and is, wrong on global warming, the EU’s energy policies – driven almost exclusively by anti-CO2 considerations due to …er…man-made warming – are still right, even if they lead to higher prices.

There is truly something of Lewis Carroll’s Alice in Wonderland about the ‘logic-on-its-head’ IPCC climate paradigm. And that’s 100 percent “gospel”.

By posting your comment, you agree to abide by our Posting rules

Latest from the Editor